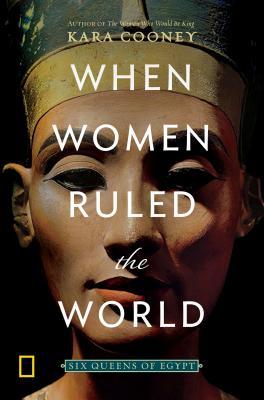 “Ancient Egypt is an anomaly as the only land that consistently called upon the rule of women to keep its regime in working order, safe from discord, and on the surest possible footing—particularly when a crisis was under way.“

When Women Ruled the World: Six Queens of Egypt by Kara Cooney

We are constantly discovering new facts and artifacts from Ancient Egypt’s people. Mummies, writings, pottery, and other fascinating things that have captured time and culture. These are done in such ways that we are able to get a glance back in history to events that were occurring and people that lived during these forgotten times. But the most intriguing parts of this history are the moments that have been erased from the walls and pictures. The moments and people that these Ancient people tried to remove entirely from history.

This book looks into those that have been forgotten, in particular to those that have been removed from the books and history. Six queens of Egypt that ruled over the centuries. Whether they were power hungry women or women who wanted peace and healing for their Egypt there isn’t much to go on. However, The historians have pieced together these six women’s histories from the rubble and reconstructed the truth. We look into the lives of Merneith, Neferusobek, Hatshepsut, Nefertiti, Tawosret, and Cleopatra. And we get a glimpse at these strong women were able to bring to this male dominated world.

It is amazing what time will do to those in history. The saying “the winners write history” is so true and shows through within the Ancient Egyptian’s history. This book takes you through the lives – for what we have been able to find – of six strong, capable women. These women moved up the ranks of the time and made it into pharaoh-ship for the most of them or close to it for the others. Considering most of the world still functioned as a patriarchy, this is an amazing feat to be able to accomplish for any woman. However, the rulers the followed after these women managed to wipe them from the records. If they weren’t erased from the artwork of the time, then their deeds were given as credit to another pharaoh. It is a sad reality that we may not know more about these women.

Kara Cooney has managed to collect together all of the little facts and theories we archeologists have discovered about these queens. Her writting is almost like a conversation between two friend intrigued by the same topic. Leading to her goal of informing everyone about this fascinating facts that we think we know. Much of the world knows about Cleopatra and has at least heard about Nefertiti and possibly Hatshepsut. I was surprised about the other three queens. I had never heard of Merneith, Tawosret, or Neferusobek. Their stories were very intriguing and the way they were able to move into power! I never really gave the palace and the power structure that was played much thought when it came to the pharaohs. Cooney really opened my eyes to the struggles that everyone faced within the family dynamics. Also, I didn’t know nearly as much as I thought when it came to Nefertiti! So many new theories about her co-pharaoh time during her life is amazing. Especially since it was originally presumed that she just died without much commentary. But she might have just changed her name?! You’ll have to read to learn more about that theory. Just goes to show, we are always learning something every single day.

This was a really good history book that opened up my eyes to a lot of events and maneuvering women were doing during the time of the pharaohs. It would have been exhausting to be playing so many political games while watching your own back at the same time. I loved being able to dive back in time and discover so much about women in power. Not only how they got there but the good they were able to achieve while in the place of power. Cooney brings up many good points about how the world as a whole views women moving into power – regardless of the time and age. But in the Ancient Egyptian’s history, they showed that sometimes it takes a woman’s touch to make things a bit better.