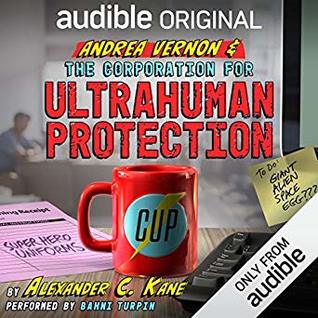 “This ain’t a fairy-tale business. It’s a cash business.”

Andrea Vernon and the Corporation for UltraHuman Protection by Alexander C. Kane

There is never a dull moment in a world were there are superheroes and super-villains always fighting. Alexander Kane’s Andrea Vernon and the Corporation for UltraHuman Protection (C.U.P) looks at a world were the superheroes are hired on by corporations from across the globe to help fight and defend. What the citizens see are heroes helping, but behind the scenes is where the true magic happens. Andrea Vernon is kidnapped, interviewed, and then hired on as an administrative assistant to the boss of C.U.P. thanks to her job application. Now contractually obligated to never ask questions, Andrea jumps head first into the behind the scenes of superheroes and C.UP.’s other employees. Andrea looks at each day as a challenge since she can’t ask questions and she uses the process of trial by error to figure it out. But hopefully she can pick it up fast, especially when the fate of the world depends on it. Filled with humor, sarcasm, and superheroes, it is one office story that will be told at the Christmas party for years.

Others in the Series:

I was not expecting the 80’s superhero movie type writing for this book. This is a world where there are super-villains and other evil doers attempting to take over or destroy the world on any given day of the week. That being said, the cheesy puns and the dorky scenes screamed low-budget films. Just like the ones were you can tell it is going to be cheesy and cliche from the opening credits, but you still can’t look away despite that knowledge. Kane captures that classic film style within this book, which was very creatively done. I haven’t read something that has reminded me of a movie genre of strongly before.

One thing that did get very annoying to me was the repetition of the hero names and their slogans in situations where it wasn’t necessary in my opinion. The Big Axe, for example, seemed to always have this need to say his name “The Big Axe” is a very loud way to who ever wanted to address him. Then, as if his name wasn’t enough, felt the need to say his slogan, ‘I swing my big axe and fight bad guys’ (or some iteration of that line) to everyone. I wanted to skip through this every time and felt myself rolling my eyes whenever he started his shtick. And he wasn’t the only one, there are a few other heroes (and some villains) who have this compulsion to proclaim who there are and what they do. I get it, you have this amazing power or ability, but instead of calling you ‘The Big Axe’ every time can’t I call you Bob or something shorter?

The depth that Kane went into explaining the background and history of Heroes was fascinating and much appreciated! There was information on a bunch of stuff and I loved learning about them along with Andrea. You learn how heroes get their superhero names and why some of them are so odd, why some of the superheroes have powers and some of them only have gadgets, and how the main team of C.U.P. were found and brought together. These little bits of facts really helped grow the world and helped me understand the characters far better. I did, however, feel like Andrea’s history and family were a little lacking. Especially by naming her siblings after the jobs they did and simply having her parents referred to as Mother/Father Vernon irked me a bit. Seemed like a cheap way of skipping through those character in my opinion. So the history and world-building were okay, but could have been pounded out a bit more.

My favorite superhero is probably Mr. Well Actually funny enough. I know he may be annoying, very annoying, but he’ll grow on you. And he can be quite funny with the way he responds back. The interactions with him and a few other heroes were really fun and entertaining for an okay book. I think if I liked the low-budget 80 flicks or even comics then I would have enjoyed this book more than what I did. But if you like those movies or like the superhero comics then you would get a kick out of this one and would probably really enjoy it.